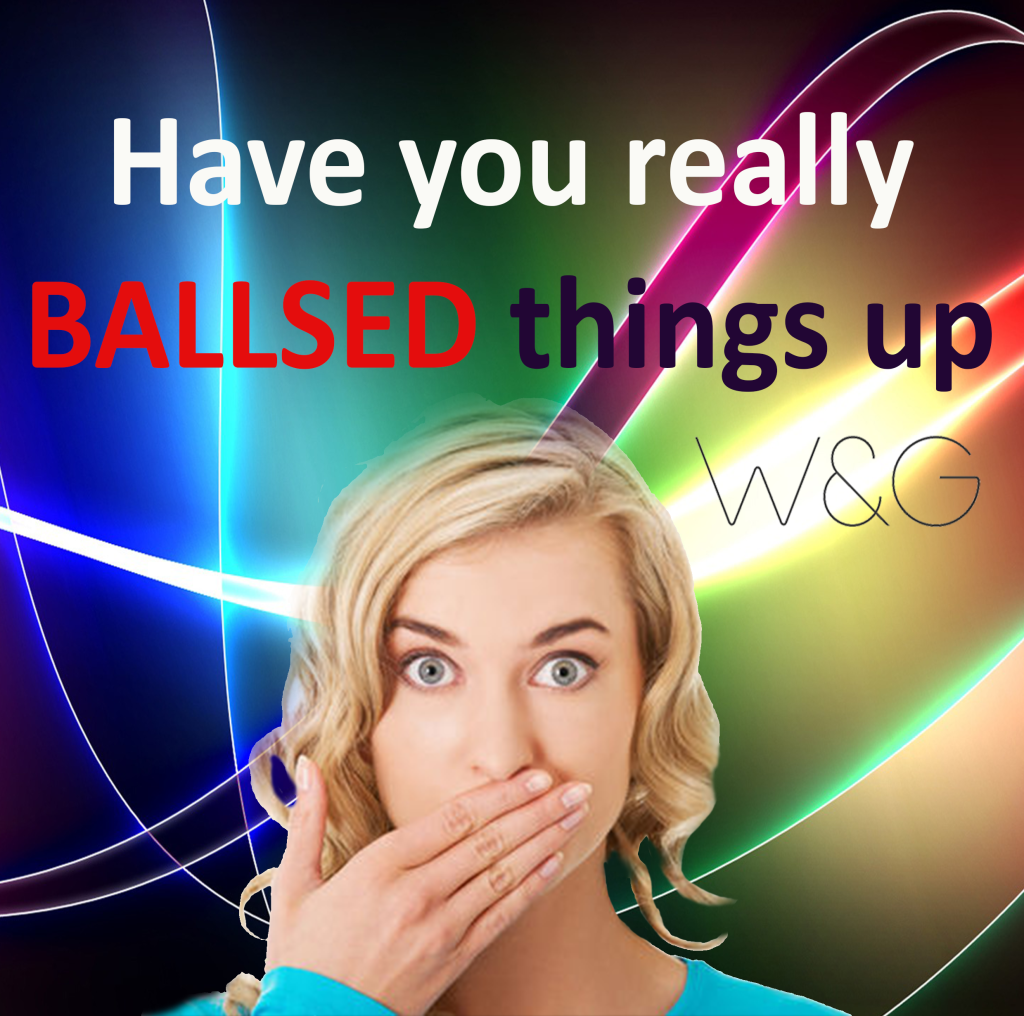 You F^Cked up. Made a mistake… There is no amount of covering this up, glossing over it – or giving it ‘spin’.

You really, actually, very definitely did that.

That was you.  You got it wrong.  You made a boo boo.  Stupid decision.  Embarrassing episode.

So given these things happen (however rarely) you have the choice of sitting in the airing cupboard with your head in your hands.  Or you can man up, make a plan and recover well.

God bless him.  Remember that debacle.

Yep.  He said that – and was recorded.

He did lose everything – job, fortune… lived without a bean for about 8 years.   But actually eventually picked himself up and is doing OK.

He agrees now – he did not handle it well.  In the extreme. You know that story.

So to give your gaffe some perspective… at least you won’t have a new phrase invented to commemorate what you did!  So let’s not dwell in the airing cupboard… and get a plan together.

A successful response to a blunder is all in your approach.   Even if the mistake is a cataclysmic one.

You have to focus on the outcome you want, in order to overcome your fear.

Fear is the problem not the mistake.

Fear of people being angry, laughing at you, hating you, judging you – rather than the poised ‘in control’ you that you’ve worked hard at showing everyone.

The annoying facts are, when you optimistically focus on you what you WANT to happen next, you have a much better chance of getting it.

Just at the very time you would rather just hide.

However, by trying to avoid failure, you will fail far more often.  You will.  And you don’t want to feel like this again, do you?

This sounds rather easy and intuitive, but it’s very difficult to do when the consequences of failure are severe.

The people who succeed in life —the ones we admire — the ones that we think always land on their feet/smelling of roses and so on – see balls ups and failure as a stepping stone to success.

Or a hazard of life.

They don’t get bogged down by it – they get on with the next bit.

Staying stuck in that f$ck-up freeze-frame keeps you in your darkest hour and lowest ebb.  Not easy to find ingenious creative brilliance like that.  In fact I would be impressed if you could start, in that state.

Thomas Edison is a great example. It took him 1,000 tries to develop a light bulb that actually worked. When someone asked him how it felt to fail 1,000 times, he said, “I didn’t fail 1,000 times. The light bulb was an invention with 1,000 steps.”  He saw no shame in getting things wrong.  They were like chiseling a piece of stone into a precise tool.

So, what is the difference between people that fall apart at a balls-up, and the ones that style it out nicely?

WELL – Some of it’s about to WHAT you do, but most of it is about HOW you do that.

The 8 Pillars of Styling it Out – when things go tits up.

1.GET IN THERE FIRST

Seriously.  Own up.  Own up as publicly as necessary.  If you have wronged one person – then that is who you own up to.

If you did it publicly (oh dear) then publicly is the way you have to go.  Sorry.  Take a breath and do it.

You can chance it that no-one noticed (risky).  But if there is the possibility that they did – the ongoing worry seriously is too expensive on your health.  It will paralyse you, make you hide away, make different decisions based on this one mistake – and I promise you, it won’t be worth it.  Also, anything public WILL come out.  It will.  Sorry – but it will.

2. SAY WHY YOU DID WHAT YOU DID.  BUT NO MITIGATING CIRCUMSTANCES

There is a trend in blogs and writing in general for HONESTY.  Being human – not all glossy and perfect.  Which is damn fine by me, as I would never be able to keep up the pretence of anything otherwise.  I have a very (albeit lapsed) Catholic approach to most things.

Here’s a strange thing: owning up to mistakes can actually make you look better.  It makes you human.  Weirdly more trustworthy.  You didn’t wait to get caught – you outed yourself – for no other apparent reason than it was the right thing to do.   Stick to the actual, provable facts.

But, because…… and I couldn’t help it, because……you didn’t help me enough…  will only annoy people.

Their brains will quickly work out counter-arguments.  Don’t waste your time.  Own the thing like an adult.  Let them insert your plea for the defence.

Our default is to be our own P.R. department.  Put ourselves in a good light.  For once – give yourself the day off.  Just allow the reaction. It won’t be as bad as you think.

3. SAY WHAT YOU ARE GOING TO DO TO MAKE UP FOR IT

It’s one thing to say you did it – but that’s only the start.  The next bit is vital.  Say how you will make amends.  If you smashed a glass you would clear it up.  Same thing with a balls up.  “I DID do that.  I am so sorry. I made a mistake.  I feel ashamed.  This is how I am going to try to fix it.  Really, really clearly.  And make sure you do it or you will ruin this whole thing and then I am out of ideas.

4. SAY HOW YOU ARE GOING TO STOP THIS HAPPENING AGAIN.

Suck this bit up.  Think about how this could have happened.  Why are you in this pickle/mess/Armageddon?  Then work out a sensible plan to make sure you don’t end up in here again.  As before – getting in there before anyone else’s brain starts to work this stuff out for you – and feel more superior, and more cross at you – is the way forward.  Which you don’t need at the moment.

You took a blow.  More painful because you could have prevented it.  (Hindsight – a complete bitch, thank you hindsight – you may leave now).  You HAVE HAVE HAVE to go back to normal.  You hurt someone’s feelings; don’t overcompensate.  You’ve apologised, you’ve tried to make amends, you have made a plan for no repeat episode.  If you don’t move on – they won’t.  You haven’t killed anyone.  Being a martyr makes everyone feel bad.  But it also positions you as the baddie, which you are not.  You are just a person who made a mistake.

It’s important that you don’t let this make you shrink away.  Properly absorb the lesson this taught you.  With a puffed out chest and an open mind.  This is going to help you so don’t shy away..

Keep going as if the thing is forgiven and forgotten, and it more quickly will be.

People are unnerved when the normal way of things is different.  By going back to normal, you reassure other people that this wasn’t as big a thing as all that.  They feel better – and there may be glitches… but life feels a bit more predictable.  The mistake disturbed that – but by adding to that jarring by acting differently only highlights it and keeps it current.

Do your usual thing – even if you have to paint on a calm face for a few days.

You are at the middle of all this.  You will notice every tiny thing that is relevant.  Every scenario.  Every repercussion.  But seriously…if this is a public balls-up – people are very much less concerned with your stuff than you think.  One of the few benefits of this fast-paced internet culture is that there is TONS of info shouting loudly at everyone all the time, and superseding your news.

You are not as big news as you think.

If you have ballsed-up to someone in particular: they do have other parts of their life.  It’s not just you. Once you have apologised, said how you will fix it, and told them your plan to not let it happen again…human nature is for them to take pity on you.  And stop YOU hurting.  And recognise your vulnerability in fessing up.  People want things to be OK.

Don’t ham it up.  That will make you look like a sleazy, disingenuous chancer.  Which you are not.  You just ballsed-up.

It is not the end of the World.  This WILL pass – and for all parties, will be OLD NEWS, in no time. (Just got to ride out this bit)

Here is an important statistic about people who bounce back from failure, mistakes or massive balls-up .  A UK study recently of 576 very successful business-people showed that 94% of those surveyed EXPECTED success in all that they did. It was fascinating – I will bring you the deets of that.  This was their set point – even if they had had setbacks in the past.  Their optimism is what stopped them from feeling as though ‘THEY are a failure’ when things went wrong. Almost to a person, they cited viewing each failure or balls-up as a building block to their ultimate success because of what they learned in the process.  There WERE failures.  Things failed.  But THEY weren’t a failure.  Things happened and they learned and moved on.

Stoic is easier said than done.  Its a matter of character.  Or more accurately patience – like most things that are PROPERLY sorted out once and for all.  In life – quick fixes tend not to stick. You can FEEL ready to sort things out – but Persistence what brings the thing home.  Not just the day after the shit-storm, but maybe the days or weeks after that.  Possibly longer.  Depends on the size of the impact you have to absorb.  Prepare for a bit of a long game, possibly (especially if your balls-up is particularly epic) but it really is never as long as you think.  Dig in for some ‘biting the bullet’ but know that you will get to the other side of this pretty quickly if you get your head around it.  People WANT to move on.  They tend not to enjoy watching someone make themselves vulnerable.  Human instinct is to want to join with you in your vulnerability and help you feel OK.

If you follow these steps; you can ride out most of life’s mistakes like a BOSS (and you are not unique…whatever you’ve done – someone beat you to it… and did much worse.)  Perfect people don’t exist.  What people present to you is only the very most polished part of what they are.  The fact you have read to the end of this; and want to make sure you make things right when you get things wrong – please know you are among the very best of people.  In the very unlikely event that you authentically work through the steps above and find yourself still being punished – well it is quite possible that it is THEY that don’t deserve you not the other way around.  Or maybe… they are just not your people.

Successful people balls it up – they also usually have a good morning routine – here is ours, click to get it for FREE 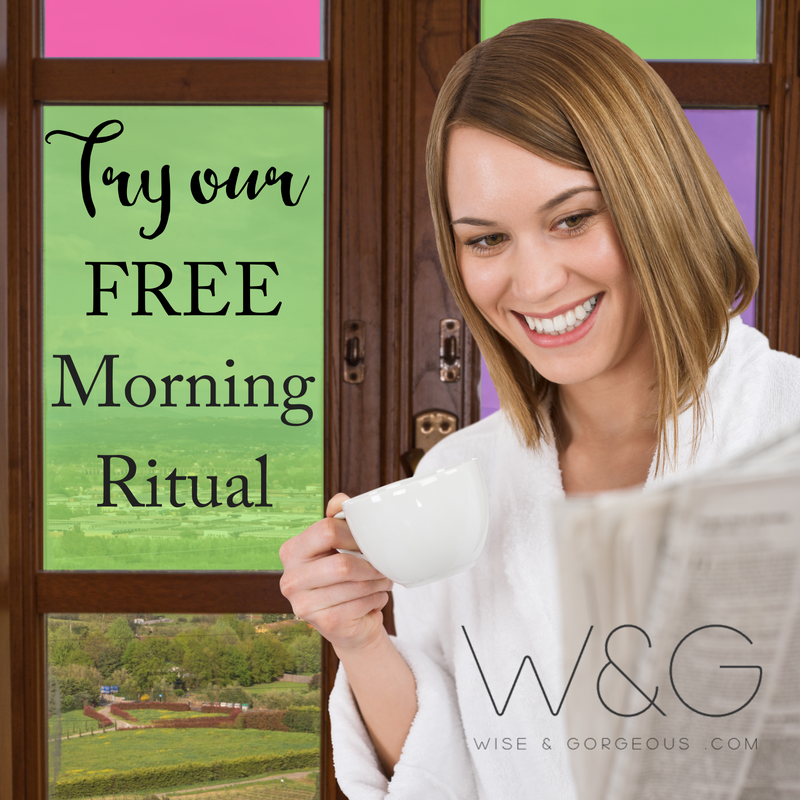