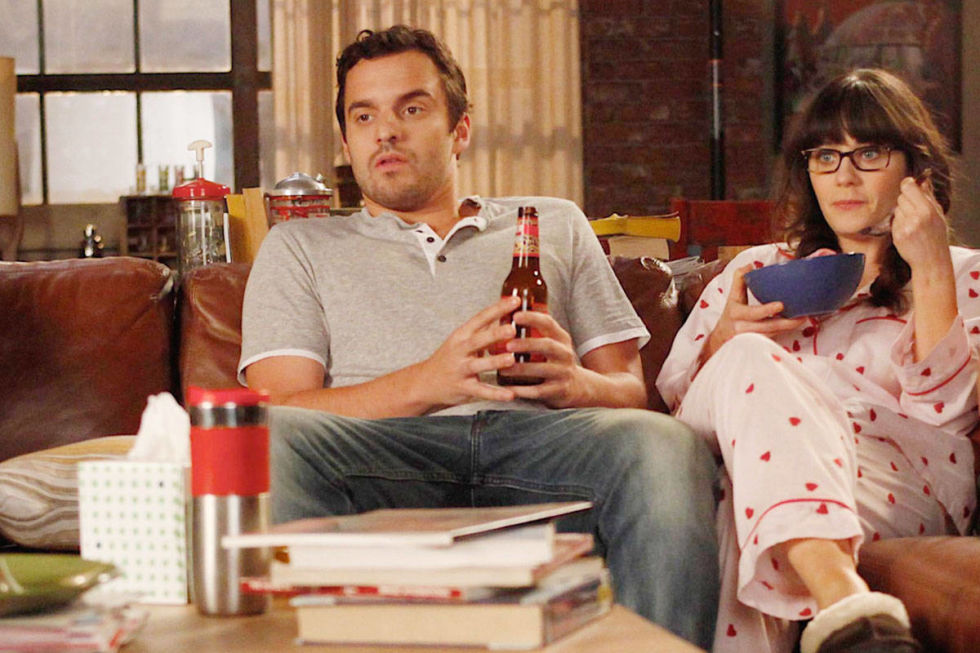 When women settle down together to watch a TV show they all enjoy – lots of interesting things are happening.
They sit in a position that ensures that everyone can have eye contact (often angled partly to the screen, partly to each other).
The conversation flows!
Women talk about; the plot, the characters, their motives – (although weirdly, tend not to try to predict the end, for fear of spoiling the experience for everyone else).  They can skilfully keep track of the story whilst enjoying the insight that their friends give them – enriching the experience and deepening the connection they have together.  Men just want to watch the programme.  They want to sit facing it, and they don’t want to talk about it until later – if at all!

Do not talk to your husband while he is watching the television.
It will make him all grumpy and way less receptive to training.
He can’t cope with the extra stimulation – this isn’t being mean – it just is.
Leave him to it and go and do something nice, preferably with communicative people.

Man being spoken to clearly –  and not listening

(Wife): “Darling, you know on Saturday – I have so much on, what with your Mum and sister coming on Sunday.
It’s going to be tight for time and I am worried about the traffic on the way into town because I will have to double back on myself and you are so much nearer because of the one-way system.”
To husbands, this sounds like just lots and lots of (vaguely annoying) detail, which doesn’t get to a particular point.
The following sentence is very much more well understood by husbands “Please could you go to Sainsburys and buy a large organic chicken on your way home?“
They understand clear, simple commands.

Tip 2. Cut out the BLAH. Give your husband direct requests.

Preferably without commas or any unnecessary detail, or worse yet – emotion. 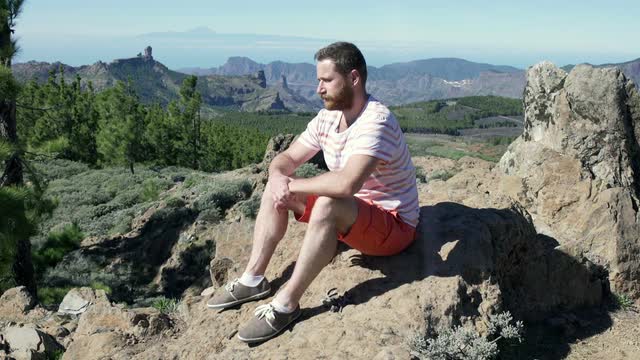 3. No Gatecrashing ‘The Rock’

When women have a problem, we phone our friends to talk things through.
We meet up.  Most usually we will talk to ALL of our friendship group (even on-line).
We use this information and opinion as a vital resource to know what do do for the best.
Husbands tend not to do this.
They go (like thousands of years of ancestors before him) to ‘Their Rock’.
The rock could be an actual rock, the PS4, the gym or the shed.
They go to the rock, staring at the horizon, with or without chest-beating, shut themselves off from the rest of the World until they come to their own conclusions.
Then they return.
The most important thing about this – is that YOU ARE NOT INVITED!
Any interruptions (other than with bacon sandwiches or coffee) will be hugely annoying.
I am not proud that I just wrote that… it is is just fact.
UNDER NO CIRCUMSTANCES ASK HIM WHAT HE IS THINKING.
No point.
He is too busy thinking to answer that question.
It will short-circuit his mind.
He will appreciate the space you have given and patience you showed him and be all grateful when he has finished doing his primitive caveman thing.

Tip 3.  If he has gone all quiet and thinky – it’s because he is thinking.

He will be back.  In the meantime – go shopping or for a nice lunch with your friends.

Married men get a raw deal when it comes to the media.  “Stupid men”, “He acts like a big kid”, “Can’t even boil an egg”.
This man who was so irresistible and perfect that you agreed to marry him!
I think lots of women are guilty of perpetrating this stereotype in their general conversation, more out of habit than anything else.
But… it does chip away and in reverse we would go absolutely postal.
From Terry (from Terry and June) and Fawlty Towers’ Basil, to today’s Homer Simpson and Peter Griffin – beautiful, sensible, long-suffering women just roll their eyes and tolerate their stupid/barking mad/incapable husbands.
Even advertising has got in on the male-bashing act
We all have stress, work, home, sleeplessness – husbands too – but sometimes (not always obvs) they have the added pressure of being the main breadwinner and the feeling that he should be ‘The Strong One’.
Give him a break on that one..
What’s good for the goose is good for the other gender…

Tip 4. Don’t moan about him about minor things to your mates.

It emasculates him, makes you look mean, and makes you both respect each other just that little bit less.
Even if you are just mucking about. 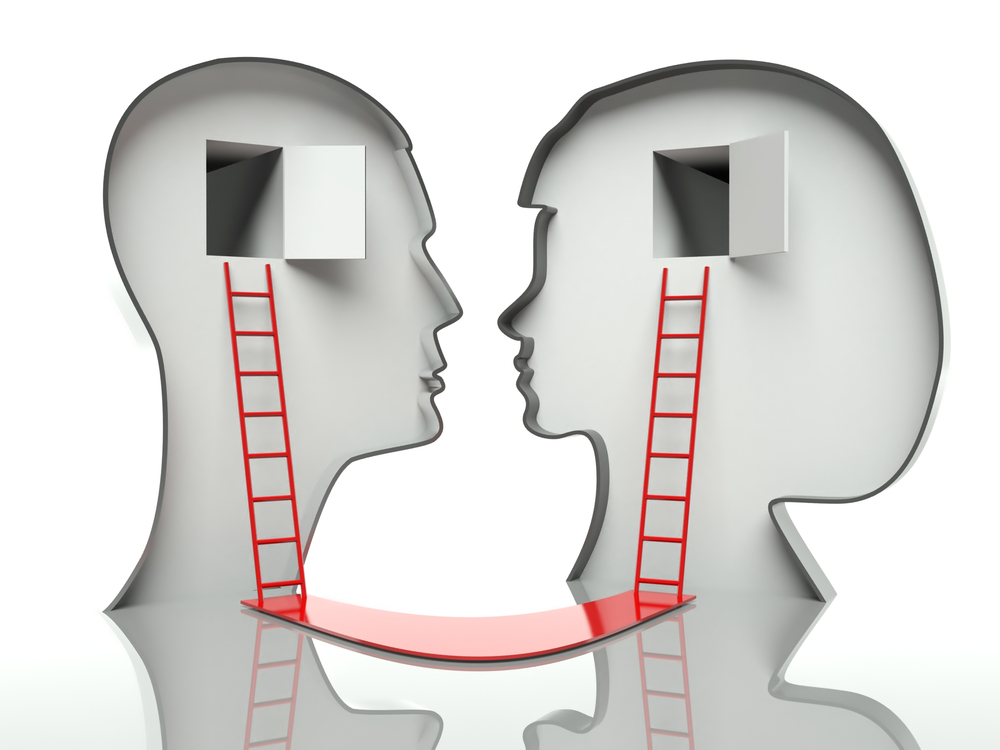 5. Play to (both) Your Strengths

As shown in Training Tip 2 – men and women approach things differently.
Women analyse, explore possibilities and collaborate – men try to fix things.
If you ask his opinion on what do do about a situation… don’t be cross if he presents you with a solution rather than an opportunity for a protracted discussion.
THAT IS WHAT YOU ASKED FOR!
Women’s conversation is more subtle (in fact we have more basic facial expressions and basic voice tones – that’s for another post) and we are highly attuned to non-verbal communication in a way that just baffles most men.
What he has most likely done, is think through all the variables and come up with the most likely and logical answer.
If you want to have a discussion, husbands react extremely well to:
Arranging a time frame in advance (I would like us to set aside an hour for a chat at about 8 tonight)
Giving your subject (e.g I want to work out what we are going to do about Christmas)
Knowing what you want the outcome to be.
Whether it’s a definite plan, a brainstorming or general discussion.
You may have a useful resource there in the form of that husband (fingers crossed).
Recognising your skills, strengths and communication differences AND where the possibilities for MIScommunication (or plain annoyance) can arise, will all help in his training.
And yours.

Tip 5. Let him fix things. His brain was designed for it.

Any team, or organisation for that matter, consists of people performing different roles.

As long as the money comes in, the house doesn’t fall down, the children are looked after, people eat regularly, nothing goes on fire and you are not overrun with pests –

it doesn’t much matter who does what.
You might both do some of all of it, or have clear dividing lines.
As long as it is shared out pretty evenly and you are both happy with it, its all gravy.
You also are both entitled to the same amount of relaxation and fun…
(I will leave you with that one…)
If the balance of all that is a little out-of-kilter – don’t forget the ‘men are not mind-readers’ thing.
State clearly and precisely what you need more help with, without unneeded extra words, commas or wild emotion.
Or maybe… in the scheme of things – it is you that isn’t doing your share?
To get the best result, it is worth recognising that Men and Women do things differently, we argue differently, we solve problems differently, we communicate differently.
Yin and Yang – can be a fantastic team….with the right training.