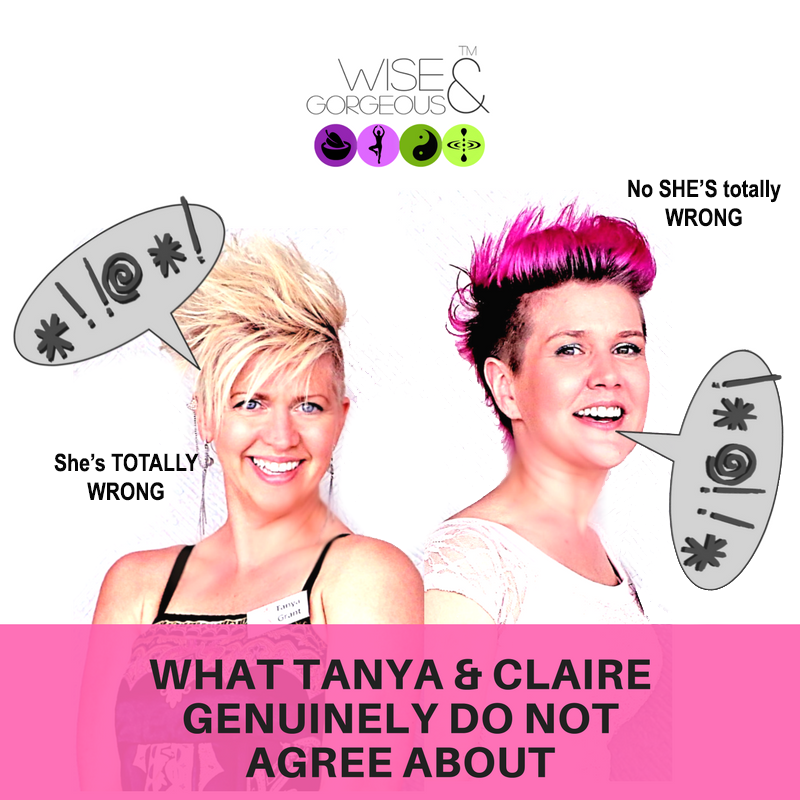 (by way of mildly funny example), that one October Monday we started creating a product.
I suggested we try to get it finished by Friday… she confessed she had been thinking ‘mid-Spring’.

I underestimate how long things will take.
She overestimates them.
We thrash it out and arrive at a realistic schedule.

My zone of genius is not remembering details – I wing it and generally skid under the door in time.
Or she reminds me.

(Things like conversations I’ve had, when events are happening and people’s names)
I don’t carry a handbag – but sometimes a sports bag with things like playing cards and random shoes in

Claire has 2 diaries. An overview and a detailed one.
She doesn’t forget stuff.
She normally has 2 perfectly stocked large handbags with her.
She could survive in the wild for weeks living out of those bags.

I mean.. she has everything in there.

Genuinely chalk and cheese in many respects.

Running a business together means we have to reach agreement… on things we don’t agree about.
To the untrained eye it could look like we have quite heated arguments regularly

But the truth is, we’ve worked together for nearly six years almost every day – and never fallen out.
Not even slightly.

Because what we absolutely fundamentally and totally DO agree on – is our VALUES – the way we want to do business with people and operate in the World.
100%.
The things we think are important about life, the Universe and everything do play a part in that.
(Quite a lot about the Universe actually)
It’s very lucky.

So when we don’t agree with the other about ‘details’ – we tend to go with the decision of the one who feels the most strongly.
It makes things easy
Sometimes there’s a compromise – but often there isn’t.
.
We often (probably every day) congratulate the other –  about a decision being a ‘good call’.
We say it’s brilliant when we make the wrong call – because the the job got done by the other one better.

I am not even joking.
As I am writing this I got a FB notification:
Here it is: 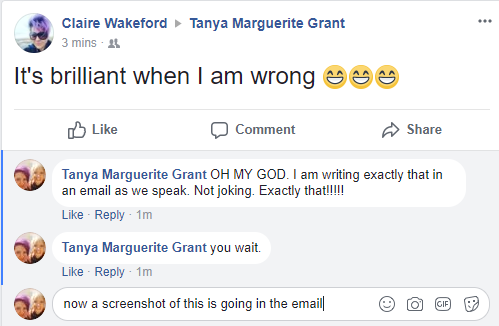 (to be fair, if I was reading this email, I’d say “yeah, right”, but seriously that’s exactly how it was.)

And this is because when you are fundamentally in alignment with IMPORTANT things – the details don’t really matter that much.
Being the one who is ‘right’ doesn’t matter at all when you are travelling in the same direction.

I felt strongly about something, argued my case – it turned out to be a good move – and then she posted that!
Everyone feels good.

Where in your life are you in/out of alignment at a fundamental level with something/one else?
Is work a place where your voice counts… or doesn’t?
Does it’s ethics match yours?
Are people treated the way you call ‘right’?
Are you?

Do your friends have fundamentally the same outlook on life as you?
(Details don’t matter – that’s the stuff that makes you interesting – but the things you consider important)

Are you in the relationship you expected at the start now it’s stopped being shiny,
you’ve stopped going in the other room to break wind and you’ve been through a few hard times?
Did you go through those hard times…together.  Side by side. Standing strong… or did some shabbiness show through.

The BIG things.  Those have to be right.
They say don’t ‘sweat the small stuff’ – because it won’t change the outcome.

Like the wrong Tupperware lid that doesn’t really fit – there is only so long  before it pops and everything falls out..
Something that isn’t right can’t make you happy long term.
No one can keep that up.

You owe it to yourself to fix that.
Whether it’s the wrong job, the wrong house, the wrong friends or partner – or the absolutely PERFECT one – it all comes down to values.

Once you work out what yours are – you’ll know what to do next.
And the clock is ticking.

Have a great day