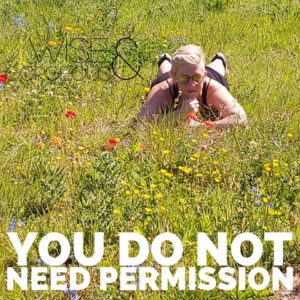 Pic: Me.
Yesterday.
Blatantly lying down in a wildflower patch on a golf course.

I was 18, studying for my Sociology A-Level and on the way out of the lesson, fully in some putting-the-World-to-rights conversation or other and I tripped out of the door.
For someone who is supposed to be good at dancing, I fall over way too much.
I picked up my stuff, and headed down the corridor… pursued by my lecturer.
“Wait up, fancy-pants – you dropped your swanky Golf Club membership card”.

While I wasn’t embarrassed about falling over, that did embarrass me a bit.
Largely because I was anything BUT swanky.

The true picture was this:
I was leaving the lesson to go downstairs to collect my nine-month-old from the childcare.
I was doing adult education A-Levels, as I got pregnant not long after I left school and I’d gone back to do A levels and a Sports Therapy Diploma part-time, in one year to catch up with myself.
We lived in a tiny house, with the mortgage rate at 17% (can you imagine?) so money was tight, so no holidays, going out or those kinds of extras.

But we could stretch to the cheapest fitness membership at the golf club
(the times where you don’t get in the way of the scary posh people).
And we got a special offer because our lodger worked there.
Also, it meant the baby could swim (I walked her there every day as I hadn’t even learned to drive then!).

So yes, it was a swanky place – but probably not the picture the lecturer had in his mind.
And I did make sure I kept out of the way of the posh people.

Fast forward 28 years and I was out for a lovely walk the other day.
A long one.
Most of it was lovely woodland but part of it was – THROUGH a golf course.
Not next to it.
But actually through it.

If I had been on my own I wouldn’t have even considered it – it looked out-of-bounds, but I was assured that this part was a public footpath.
Hmmm.
It doesn’t seem right.
People teeing off, groundskeepers raking the bunkers – all around us.

My brain reacted with a very uncharacteristic: “ARGHH I shouldn’t be here – don’t get in the way of the posh people”.

(if you know me in real life, you’ll know that’s not like me one little bit.)

Bit of a reflex going on there…interesting.

A little way further – I could see a sign that said ‘public footpath’ and then when I started to actually open my eyes properly – they were at intervals all the way along the path.

It was a really really lovely addition to the walk.

All this fancy manicured-ness and order – breaking up the beautiful, random wildlife of the woodland.

When we had a quick chat with a couple of golfers – they confirmed what I suspected – that people rarely ever use that footpath.

They thought it rather lovely that we were.
I’m certain people would if they knew.

When babies are born, they don’t ask permission.
They just are.
They scream to get their needs met.

As we get bigger we start to hear the word: NO.

Don’t touch that, don’t shout, sit still, you can’t have that, you have to share, don’t climb up there, when you’re bigger, not till after your dinner.
When you leave school, when you get a job, when you save your deposit, when you’re 16, 18, 21 – when you pass an exam.

Check-in with your parent, your teacher, your line manager, your bank manager.

We internalise a lifetime of NOs.
Then some of us make that the default setting.

And rather than some external ‘grown-up figure’/boss/manager dishing them out – we do it to ourselves.

We give ourselves reasons that we can’t do a thing before we take time to work out ways that we could.

And weirdly when the older we get, the more reasonable our ‘wants’ get (to be treated with respect, for everyone to pull their weight, to be given fair treatment),
the less energy we devote to insisting upon them.

It was only a footpath.

And they weren’t scary posh people, they were rather nice.
Seems teenage me had made that bit up and inserted it in the up-till-now unexamined file marked ‘golf course etiquette’.

We can literally build prisons, lock ourselves in, throw away the key… and not even know we did any of it.

Sometimes no one is in charge of who gets the thing you want – its a case of whoever stands up and claims it.

Just because it has always been done a certain way doesn’t mean that is the way it has to continue.

Imagining worst-case scenarios for so long that decades go by …and nothing changes.

Just more years with more memories of the thing that needed to change.

Ambitious goals or certain lifestyles aren’t reserved for ‘other people’.

And sometimes people dance a certain dance forever with another person/people…
and it isn’t until they examine it objectively do they realise – it’s all a bit shit and things need to change.

If you want something to change:

You are an adult.

You do not need permission – you need to decide what you want.
Understand that your happiness is of equal importance to everyone else’s.

Walk down whichever footpath you like the look of.
Some people will come with you.
Some won’t.
Their choice.

But that thing you want – make sure you go and get it.