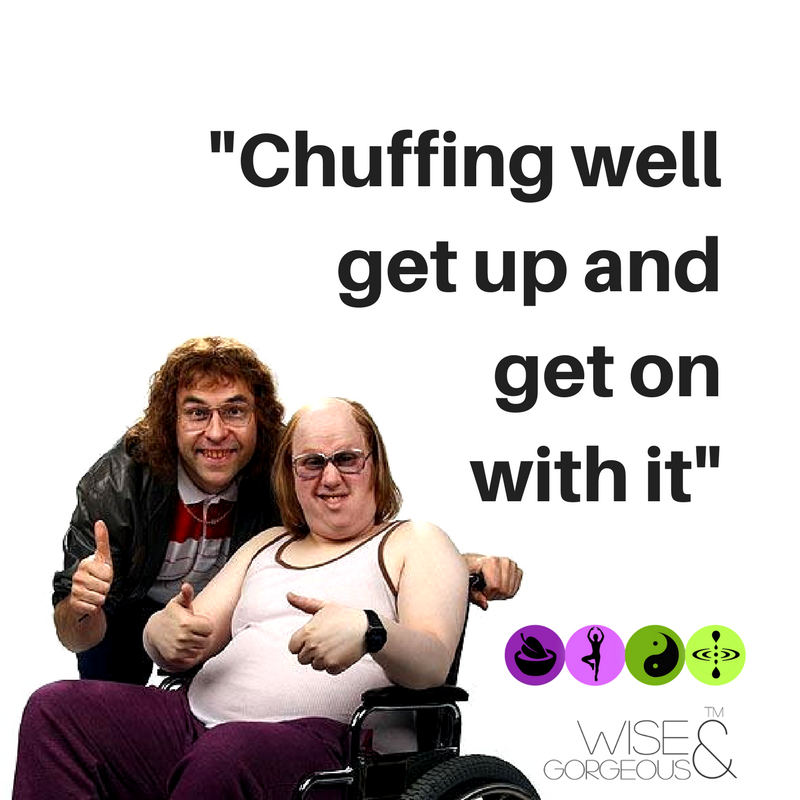 I want to tell you a story

I was having some treatment a couple of years ago.
I had to be on an infusion. in a chair all day for the best part of a week.

I don’t mind needles, I could walk around with one of those wheely things and was in a nice room with lots of other people and snacks.

The side effect was a temporary rash that looked like the comedy plague (so when I popped into Tesco on the way home people basically ran – which was very funny) but that was it largely.

I brought my laptop and had a serious Netflix list to get through, but I don’t think I really watched anything because I was totally entertained by the people.

All the other people there were in for a different treatment that they had once a month, for about an hour and a half, so I had a steady stream of people to talk to and I am nosey so that worked well.
(I also like hypnotising people and doing magic tricks, so got some serious showing-off hours in)

Everyone was being treated for the same condition – which CAN deteriorate into disability – but often doesn’t.
Some of the key factors in staying able is to; keep active, eat well, meditate and keep a positive outlook.

(sometimes things get worse anyway – but actually there is a lot of evidence in lifestyle being a MASSIVE factor).

So I was treated to an extraordinary potted summary of people’s lives, their attitude to things and how they were getting on.

I wheeled my drip on wheels (nifty) to the loo and when I got back there was a new punter/patient in the chair next to mine. So I heard her story.

The short summary was; Her boss was discriminating against her because of her condition, as did her last boss, she’d fallen out with her neighbour but on the positive side… she did wheelchair basketball.

“This is a very cruel condition” – she told me.

Gulp. This made me feel a bit guilty, there I was congratulating myself for being bright and breezy, laughing at my rash and posting it on Instagram, seeing if I could get away with going to the gym the next day… and this poor woman was confined to a wheelchair.
And to top it off she was experiencing discrimination in the workplace.. and she was still making the best of it by still managing to do a sport.

That’s a tough story – but she was commendable, right? I told her so, too.

She finished her infusion and started to get ready to leave.
Can I help you with your stuff, I said.

So I packed up her stuff, got her coat and asked if how she was getting home.

SHE STOOD UP and said, I’ve called a taxi – nice to meet you thanks for the help and literally jumped up snf strode (strided?) out of the room.

I mouthed WTF???? to one the nurses there (who is a great laugh, I know really well and has done some personal training with me in the past) and she just smiled, shook her head and mouthed back.. “I know.”

Well – she HAS a wheelchair because she bought it herself, she doesn’t actually need it, in all honesty she’s probably fitter than you or I. She doesn’t get any symptoms – she admits this.

“But she does wheelchair basketball??? Maybe it’s a mixed ability thing??”

No – everyone else is disabled in the team, she’s kind of in it on a technicality. She’s decided she wants to ‘get ahead’ for when/if she becomes disabled. We keep telling her it’s highly unlikely.

“But she was saying her boss was discriminating against her step agaonst her at work!?”

Well, apparently it was about her insisting on doing less work because of her diagnosis and he even offered for her to start later in the morning… even though she can do her job perfectly well.

Maybe the neighbour thing was a coincidence.

And yes it’s true, no one knows the whole truth, and yes things are different for everyone but this is a POWERFUL example of someone living up to her story.

Living in the worst case scenario.
It’s become – her thing.

Its a shock to receive a serious-sounding diagnosis, as is the thought of living with uncertainty.

And actually some of the most amazing Kick-ass superhero, hardworking, inspiring people I know are wheelchair users, and I could, in theory, join their ranks one day – so this isn’t about that at all. (Even if you are still cross about the email title, which is, frankly, a fair call).

What I felt in that moment was, how offended I was on behalf of the people who actually have to use wheelchairs and how disrespectful that seemed to them. (followed by not being sure if I am in a position to be).
I asked one just now.

She said she would tell her to “chuffing get up and get on with it’.

Another woman in that room told me that she was so grateful that she had had a hard time when she was brought up in care – because it makes her delight in every precious day with her own children.

Now she really DID need to be in a wheelchair and she used it like a paralympian.
She also mentors teenagers in care once a month in her spare time.

Story. Flipped. Then blown out of the arena.

If you talk to anyone for long enough and ask the right questions – you will hear an important story.
Tales of poignant things that happened in childhood, cruel comments, neglect,
Life-shaping stuff that happened later, cheating spouses, bereavements.
A scary diagnosis even.

The sad part is… you can’t change any of that
But you CAN change YOUR story about it.

You CAN decide whether what happened then can rob you of your happiness and success now.

It is about taking that story, the one you’ve worked hard at keeping alive and in your present and actively deciding – ENOUGH IS ENOUGH.

You can stop feeding it and giving it power.
It doesn’t negate or excuse what happened – it just stops it robbing you of any more happiness.

Draw a line
It doesn’t have to be your thing.
You can have other things.

There is an argument that there is a time for ‘getting it out of your system’ and talking about it – the stats tell us therapy is about as effective as not having therapy… at 50% success rate – but once you’ve done that – leave it alone.

If there is stuff you physically can’t do – to embrace all of the things you CAN do and enjoy the f*ck out of them.

If someone told you that you’d never amount to much – don’t ‘show them how wrong they were’.
Don’t do that, it’s none of their business – do it for you.

Think hard about where in your life you have decided you CAN’T because of what happened to you and how could you change the story you are telling yourself about it?

We’re not saying it’s always an easy thing to do.
We don’t underestimate that.
You may even need help to do it.
It might take a while to bed in.

But the important thing is – it’s possible and you have to start.
Get a pen and write this down.

What is my story and what is it stopping me doing?
How can I reframe that story (or even abandon it) and what would that make possible in my life?

And then most importantly, as Nike say… JUST DO IT.
We don’t get to change the past – we can completely reimagine our future.
No crystal balls – a fresh clean-slate every day.
From today.
From this moment.

All of that is up for grabs for you.

It could be the best thing you ever did.

if you want to chat about any of this stuff – or anything Mind, Mood, Body & Food – come and chat to us in our FREE facebook community. We’d love to hear from you

Add us to your address book
Want to change how you receive these emails?
You can update your preferences or unsubscribe from this list.